India could break apart if it doesn’t tackle corruption in its political system Arvind Kejriwal, the leader of India’s newest party, has told the BBC.

Earlier this month, he resigned as chief minister of Delhi in protest at what he says was the blocking of his anti-corruption reforms and is now leading his Aam Aadmi party’s (AAP) spring election campaign.

There it was: clean, white and defiant.

A circle of Arvind Kejriwal’s shirt was poking from a hole in the middle of his rumpled sweater. And below, his bare feet were clad in well-worn sandals with a relaxed coating of dust.

But perhaps more significant than Mr Kejriwal’s choice of look for his BBC interview is that he will probably be quite happy for us to point it out – unlike many smarter-looking politicians.

After his electoral breakthrough last year, dressing down is now a poll-tested way of dressing up his Aam Aadmi or Common Man party’s anti-corruption campaign.

In the picture Mr Kejriwal seeks to paint, the always-flawless tailoring of India’s political and business elite represents the corrupt old-order. 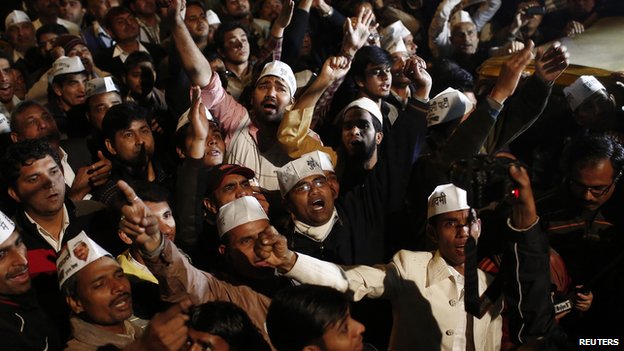 It was that order he was targeting in his interview, arguing that the old established parties have in effect conspired with a handful of Indian billionaires to create a new oligarchy.

So whether the Bharatiya Janata Party (BJP) and its leader Narendra Modi or Rahul Gandhi’s ruling Congress party win the spring elections, “makes no difference”.

Corruption was at the root of all India’s problems he argued, dismissing suggestions it was only a minority urban concern.

He went further, saying that unless India tackles political corruption “the country will not survive”. 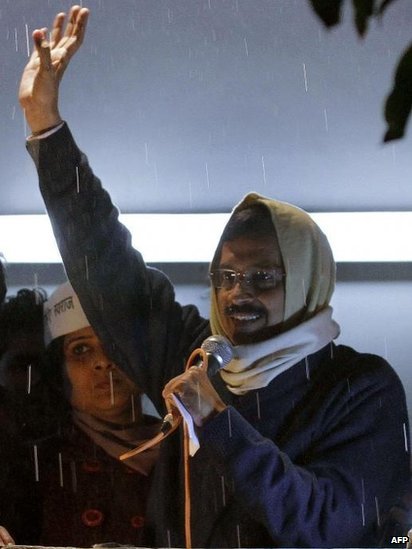 Mr Kejriwal, wrapped in his trademark scarf and drab sweater, looks like the man of the people, reaching out to the common man

“Indians are first class people suffering from third class governance,” he said, saying only a minority could prosper in India.

“If you go to America or London, you will see Indians shining,” he said, which also sounded like a deliberate twist of the BJP’s 2004 “India Shining” campaign slogan. “My job is to change the system so all of India can shine.”

He claimed he had “substantially reduced” corruption during his short tenure as Delhi chief minister, by encouraging people to use their phones to record any official offering a bribe.

His plans for bringing change on a national scale are less clear. Mr Kejriwal said he doesn’t want to be prime minister, but again declared himself “an anarchist” trying to “shake up the system.”

Such remarks are bound to divide his many critics and supporters once more.

But regular salvos aimed at the AAP by Congress and the BJP are a clear sign they’re rattled by his political insurgency. “This is a guerrilla force attacking two standing armies” says Professor Bina Agarwal of Manchester University.

And the hole in Mr Kejriwal’s sweater says this is a man determined to keep burrowing.