Speaking at the session ‘Dharna, Democracy and Demographies: Making Government Work’ at the 13th India Today Conclave on Friday, Kejriwal said the Modi government has been indulging in illegally acquiring land from farmers for corporate groups like Adanis.

Kejriwal said farmers in Modi land were the worst victims of illegal land acquisition. “If farmers elsewhere in the country come to know their brothers’ plight in Gujarat, no farmer in India will vote for him.”

Listing out examples of village after village, Kejriwal tore into Modi’s governance model and said that his three-day tour of Gujarat had laid bare before his eyes all development claims of Modi.

No riots in Gujarat in 10 years. Really?

The AAP leader said, “Riots do not happen in this country on their own. They are orchestrated.”

Kejriwal said if a single riot case is investigated properly, no other riot will ever happen.

On Modi’s alleged ties with Ambanis, Kejriwal said that he had made a son-in-law of Ambani family a minister in his cabinet.
Listing out the failures of Modi government sector by sector, Kejriwal said, “Modi’s own constituency does not have proper roads, schools and cleanliness.”

Kejriwal said that the country today was not run by PM Manmohan Singh or when the government changes even Modi. He said that Mukesh Ambani was instead running the country.

He also raised questions on the issue of corrupt ministers in the Modi government and alleged that the chief minister has a bond with Mukesh Ambani.

“Why have you included Babu Bokhiria as a minister who has been convicted in a mining scam and sentenced to three years and is out on bail now?” he asked.

“Whereas another minister Purshottam Solanki, who has been convicted in Rs.450 crore fisheries scam, is also a minister in your Cabinet,” Kejriwal said. 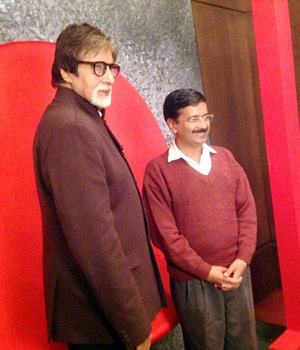 Kejriwal said his convoy was attacked three times in his three-day tour. “That speaks volume for Modi’s security model.”
Kejriwal said Gujaratis were living under fear of Modi. He said when he met people, they were interrogated by police soon afterwards.

Kejriwal said, “In Gujarat, the opposition is non-existent. Its members is threatened, coerced into submission or even killed.”
The former Delhi CM said, “Gujarat is run by Adanis and Ambanis and not Modi.”

Am I a Congress agent?

On the accusation that Kejriwal is an agent of Congress, the AAP leader said, “We exposed Robert Vadra. BJP did not despite they having the same set of papers for close to year-and-a-half. We exposed Salman Khurshid. BJP did not. We defeated Sheila Dikshit. The BJP knowingly fielded weak candidates against her for the past 15 years.”

Kejriwal said, “Though the UPA government has harmed this country as much in a decade as the British did in a century, we should not change one evil with another.”

Kejriwal said his party workers need not have gone to the BJP headquarters. He admitted that some his party members indulged in violence and apologised for their deeds.

Maintaining that he was upset about this, Kejriwal said, “We do not have a fight with either the BJP or the Congress. We fight for issues and we need to be with people 24×7.”

“The violence was not needed altogether,” he said.

On khaps, Kejriwal said, “It is not a constitutional entity. It is very much like a kitty run by women.”

“The problem is not khap but their wrongful decisions.”

The solution, he said, should be action against the decision and those who make these.

“If you ban it, they will meet again under some other name,” he added.

Maintaining that corruption and communalism were two sides of the same coin, Kejriwal said, “One government indulges in scams of all sorts for five years. And then another political player orchestrates a riot to polarise votes. They do nothing and votes are evenly divided.”

Appealing to people to join the AAP, the former Delhi CM said, “Until a few years ago, people of this country had given up hope. After the Anna Hazare movement and the subsequent formation of AAP, that cynicism has come down.”